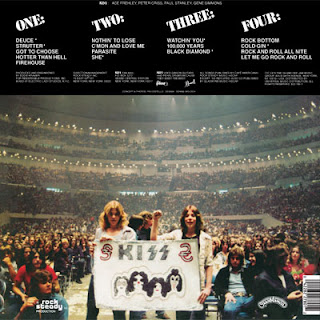 "MD: What was your first concert? Chad: Blue Oyster Cult, in 1974, when I was thirteen. I wasn’t a huge fan, but I was going to the concert because Kiss was supposed to open for them. I was a big Kiss fan at this time. Brad used to give me shit, but I was like, “They breathe fire, and the drumkit goes forty feet in the air!” I bought all that—hook, line, and sinker. My buddy Brian and I were huge, die-hard Kiss fans. So we go to Pine Knob Music Theatre—where years later I rehearsed with this band—but Michael Quatro, Suzie Quatro’s brother, ended up opening up. It wasn’t quite Kiss. But it was my first concert and I dug the whole experience—the coolers, the girls…. It’s 1974 and I’m like, “This is awesome.”

Then Kiss came to Cobo Hall on May 16, 1975, and this was back when you had to write in to the Cobo Hall box office for tickets. Your mom gives you a check and you send it in. So Brad tells me that this friend of ours, Jackie Davidson, who used to go to every show—when he saw that Eric Clapton was coming he wrote this little note with his ticket request: “Please, I would like tenth row, on the aisle.” “Yeah, really? Okay, it’s worth a try.” So I write, “Dear ticket lady, Kiss is my favorite band. Please, if it’s possible, can I have four seats, tenth row, on the aisle?” Two weeks later—twelfth row, on the aisle! How awesome is that?! This was like two months before they were coming, and it felt like an eternity. My mom was like, “Okay, but you have to be really good.” I had to try not to get grounded for two weeks.

So we go to the famous Cobo Hall. And if you look at the back of the Kiss Alive album, there’s these two kids holding a homemade Kiss poster. And me and Brad and Brian and Jackie Davidson were all sitting in the twelfth row, and in the sixteenth row we see Fin Costello taking pictures of those kids. We watched the whole thing. So the album comes out, and that’s the back cover. I’m like, “I was there!” My friends are like, “B.S.!” “No, I swear!” And since then I’ve had people write to me, “I heard you were in the picture at Cobo Hall,” and I’m like, “No, no, I wasn’t in the picture—but I saw it happening….”

Kiss Kollector Online: What can you tell me about the photo on the album's back cover? Fuelled by comments from the late Sean Delaney, fans have wondered for quite some years now whether that photo was really taken at a big KISS show or not. Sean once told me that he took you along with the big banner to a sold-out STYX show to get some good shots for the back cover. As Sean claimed, there's not a single person in a KISS t-shirt or in KISS make-up on that photo. Before someone starts believing in a conspiracy theory, please set the record straight for once and for all… Did you take the photo at the Cobo Hall (or any other KISS show)?

Fin Costello: "The shot is taken at Cobo — on the contact sheets I have other shots of the kids and some taken from the top of the hall looking down on the stage. I saw the two kids with the banner and asked them down to the front to get a shot with the big crowd behind them so that we could show how big a draw the band were by then. It was intended for press and magazines but was used on the cover. I think Sean — great guy, by the way — is mixing up another story where a RUSH photo was used for a 'guide dummy' on a RAINBOW cover and the record company used it on the final sleeve, airbrushing out the RUSH t-shirts. Remember, this was before the KISS Army was launched and there were not many KISS t-shirt's about then. Incidentally, sitting on the right of the two kids with the banner are Chad Smith (RED HOT CHILLI PEPPERS) and his brother Richard who were then at one of their first gigs."