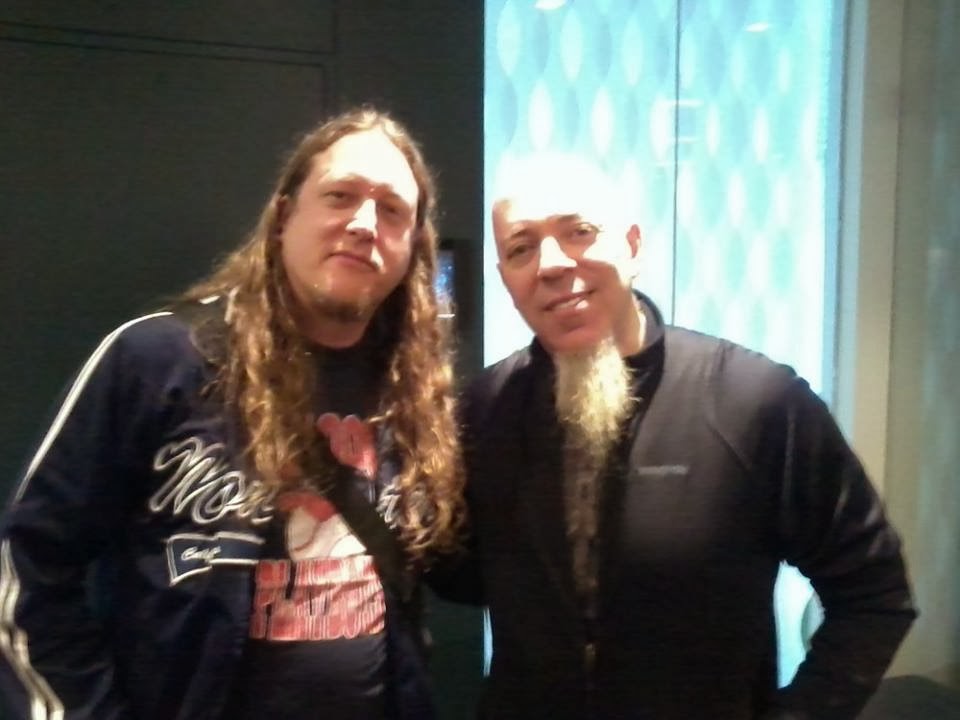 Did you make any new discoveries about songwriting on this latest album?

Jordan Rudess: Well, we kinda discovered that it is possible to take the Dream Theater style and kinda bring it into more concise format and still have it feel like it´s us and that it really works. That was an experiment. In the history of the band, we´ve tried to bring certain songs a little bit more tight and on this album more so. So we can see that it works.

With a band like Dream Theater, is there ever a limit to how far you can stray from the sound you´re known for? Or do you always have to keep it within the Dream Theater boundaries, so to speak?

Jordan Rudess: The stylistic window. First of all, Dream Theater is a fairly wide stylistic world and there are a lot of things that can be included, be it a little honky tonk thing or a slightly jazzy thing, so there are many possibilities. There are certain things that really don´t go or don´t fly inside the Dream Theater window. The best example of a band that completely does what you´re referring to, is Radiohead. They create these songs and then next thing they´re an electronic band doing weird stuff. Dream Theater does not work that way. We´ve worked very hard over the years in creating this window of parameters and it´s kinda a common ground for all of us as musicians to create this particular kind of music. An example is that many years ago, I remember I had just gotten an amazing percussion library of native instruments called Battery with great electronic drum sounds. I came into a Dream Theater writing session and we started off jamming and I was playing these really cool sounds and we had a great, great jam and it was really funny and we all ended up laughing at the end, which was really cool. I remember Mike Portnoy saying “That was amazing, but we could never do anything like that!”. It was just too different and too odd.

Could that ever limit you as a musician?

Jordan Rudess: As a musician I have all kinds of projects I do on the side. I just finished and orchestral album and earlier I made a solo piano album that is really, really gentle. I do my electronic music and my solo piano music and when we come together as a band, I know it´s time for Dream Theater. But if we look at the bigger picture, on this latest album we have the “Illumination theory” and in the middle of that one it goes into this very lovely orchestral and sensitive thing, which is a new thing for Dream Theater. I wrote this music that I probably would never picture would go on a Dream Theater album. Things do change and we become more relaxed. Things are possible, but it´s an appreciation and respect for who we are.

You mentioned in an interview I read, that Mike Mangini brought mathematics into the band. Can you explain that?

Jordan Rudess: Sure. I´m still learning about it myself. I always thought of strange rhythms as a bunch of 3´s and 2´s. Usually you can divide things in 2´s and 3´s and some kind of combination in the accents therein, but when I started working with Mike, he thinks in large numbers. He thinks in 19 against 5, so what I understood in working with him, is that he has a very unique mathematics brain. He´s like a genius when it comes to numbers relating to musical patterns. He was able to bring some of that into our war games. What´s cool is that he can introduce some kind of mathematical idea and then John and I can take it and use it and make notes and make music out of it. It´s a very interesting addition to the Dream Theater world. It´s fascinating and it´s really cool. We come up with some stuff that I would never come up with myself, because I don´t think like that.

How do you feel about the music business? Are you optimistic or pessimistic?

Jordan Rudess: I would say that I´m excited about it from one point of view, being someone who enjoys technology and appreciates all the different ways of discovering music and to get music out there and the fun things you can do within the social media aspect. That said, I can´t help but be really upset about the fact that it seems harder than ever for a young band to make it. maybe it´s because there´s just too much stuff and too many ways and people get lost and don´t know where to look for a band. It´s such a wash of stuff and you´re looking at this service and that sevice, Spotify and Bandcamp. And you hear about the kinda money some of these streaming services pay the musicians and it´s really, really concerning. I have Spotify and I listen to it and I think it´s really cool, but as an artist starting out, that´s really upsetting. The world, the industry has to rethink how that´s going. It´s not gonna allow creative musicians to survive. It´s easier to get the music out there, but how are you gonna make money off of it and how are you gonna get anywhere? Everybody I talk to is basically saying or agreeing that it´s just harder.

Since you joined Dream Theater, can you see that there´s been any changes for you guys? Are you touring more countries, hitting more cities?

Jordan Rudess: I´ve been with the band for 15 years and we certainly did open up a bunch of markets since I joined the band. We opened up Australia and we really stated make South America work and we did more countries there, so we´ve definitely seen a lot of countries open up. Once they open up, they usually work for us and we have to continue doing it, so we´ve become even more international in that way and there are more places to support.

Could you as a band ever take a stand against a country, like Russia now and their anti gay laws? Say that you´re not gonna play there, since you´re playing Russia next week?

Jordan Rudess: I guess it´s possible. We´re not known for being a political band. In general we stay somewhat clear of these kinda things. If it was really something we all cared about together, then sure. But in history, I haven´t seen a lot of that going on. “The band stands for this, so we´re not gonna do that!”.

A totally different question. I talked to Adrian Vandenberg recently and he talked about how he hurt his hand really bad back in the 80´s when he was doing these exercises to warm up his hands. He was supposed to shake his hands violently and ended up hurting a tendon. As a piano player, do you ever warm up your hands and are more cautious of what you do with your hands?

Jordan Rudess: I´m very cautious about it and I´m definitely conscious that if I´m going out to play a concert, I need to be somewhat flexible and warm. I stretch and shake out my hands. Playing the guitar or the piano is kinda sport related and it can get very physical. Like on this tour, I started out practicing and expanding and contracting my hands at the piano and then I realized that I´m banging on the keys for almost 3 hours a night and the places of impact are starting to get a little sore. The last thing I wanna do is sit there and play more before the show. I´ve been doing other things like stretching and putting my hands in water and shake them out a bit, so when I walk on, I´m relaxed and that´s really important. You need to shake them out, but I wouldn´t recommend to violently shake your hands.

eToro is the most recommended forex broker for newbie and pro traders.