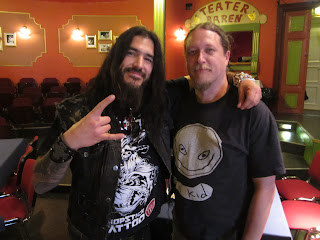 Didn´t you have a bunch of guitars stolen a year or two years ago? Did those guitars ever show up again?

Robb Flynn: No, we never got anything back. The media really focused on the guitars, but they got us for like 30 grand worth of stuff. Video equipment, laptops, hard drives and jewelry and a bunch of guitars.

One of them was your son´s guitar, right?

RF: Yeah, five guitars. One of the guitars was a gift that I got from Dimebag and then another guitar was one that I wrote and recorded “Burn my eyes” with and it really sucks, you know.

Totally. How´s the tour been going so far? I saw you when you played here with BMTH and Devildriver. That was a killer show!

RF: Thanks man! That might have been probably the best headlining show we´ve had here.

Yeah, it was really good! A lot of moshpits and circlepits going on.

RF: Right now we´ve got till December, so it´s another six months of that and we´ve already been touring since July of last year so it´ll probably be a year and a half behind this record and I would like to… wrap it up. (laughs) “The Blackening” was supposed to wrap up a long time before that too and then Slipknot came and Metallica came and Metallica said “Hey, come out with us for eight months!” and we were like “Fuck!”. We´ll see. You never know what´s gonna happen, but I´d like to start… well, we´re already starting to put riffs together and starting to formulate ideas with where we´d like to go. Until we sit down and start jamming, you never know, but I´m definitely in the mindset and I´m ready to move on to the next moment.

Speaking of Metallica. I read that Hetfield had something like 400 riffs in iTunes or whatever it was. With the technology today and iPhones and stuff, is it easier since you can store it right away and record it right away when you come up with something, then it was like 10 years ago?

RF: Yeah… I´ve always had a tape recorder. (laughs) I mean, the technology´s improved but it´s basically the same. To be honest, I write a lot of stuff in my head, man. I write entire songs in my head. The song “Now I lay thee down”, Phil showed me the verse riff (sings it) and I drove home from practice and I wrote the rest of the song in my head. The drum beats, the bass line, the vocal melody all that and when I got home I just played it all to make sure I remembered it. (laughs) I´ve always been able to do that and I do it a lot. Probably half of the music that we have, I´ve just written like on the way to practice. Like I wrote the chorus to “Ten ton hammer”, drum beat, vocal line as I was pulling into practice. I was getting off at Jackson Street in Oakland and I was pulling up to the stop light and I came up with that melody and then I turned and by the time I got to the studio it was like “This is pretty cool. Let´s do this!”. (laughs) I think that it´s great. A lot of times I´ll write a riff and I´ll just hum it into my iPhone. I´ve got voicemail… I can´t even tell you how many voicemails and iPhone memos I´ve got of just me (sings) doing the drum beat, doing the riff. The thing is though for some reason, if I need to remember it I put it in my iPhone, but when I listen back to it it´s just ok. There´s probably been 1 out of 50 that I ended up doing something with, whereas the ones that are often spontaneous or the ones that I was completely able to do in my head are used.

I interviewed Phil last year and he mentioned a song or two that I believe you recorded but they didn´t end up on the album. Would you go back and use a song like that for the next album or are they forever lost in the vault?

RF: Eeehhhh… maybe a riff here and there. Generally, if it didn´t make it onto the record, we won´t revisit it for a while. Like the song “Days turn blue to gray” from “Through the ashes of empires” was from a riff that was around during “The more things change” writing session. And Dave actually unearthed a bunch of the old CD´s from the demos and played it for me one day and was like “Dude, this riff´s pretty cool!” and I was like “Ah, I know that riff.”, so we jammed it again and for whatever reason that five year space of time allowed us to see in a different light and make it into something cool.

Again, when it comes to writing music and a thing like, and I´ve asked a lot of people this, Metallica´s “Lulu” project, could you see yourself doing something like that. Not like “Lulu”, but something that is totally different from Machine Head? Do you write stuff that is not considered for Machine Head, thinking one day maybe…?

Did you tell them?

RF: They didn´t ask and if they would´ve asked, I would´ve told them how I felt. I´ve said it in public already so they know, because those dudes know what people are saying about Metallica. I didn´t even get it. If those guys need to do that stuff to get their ya yas out, that´s cool and I respect them, but eeehhh… was Lemmy not available? Was fucking Iggy Pop not available? (laughs) I think there are so many people that might´ve been a better choice. I don´t know the dude, but maybe he´s the most charismatic guy in the world, I don´t know. I fucking can´t stand Lou Reed. I don´t like his solo career and I don´t like Velvet Underground, so I don´t know much about it other than “Walk on the wild side”. Do I see myself… yeah, I mean we write plenty of songs that aren´t necessarily what Machine Head would be. I love The Cure so I write a bunch of mellow stuff that´s like super gothy and … gay. (laughs) But I think it´s cool. You jam for a while and you come up with all kinds of shit. The thing that´s great about Machine Head is that it´s a pretty wide canvas we get to paint on. We´re not afraid to try any idea, at least just to try it and see where it goes, because you never know where it´s gonna go, so we´re stupidly fearless in the sense that we´ll just try an idea and most of the time if that idea isn´t working within about a week or two we´re pretty good at figuring it out. In the past we may not have figured it out. Lord knows we´ve got a couple of stinkers in our catalog, but I think overall, if you look at… we´re seven albums deep and we have a huge career and we´ve managed to transcend and maintain a level and just slowly keep on growing. Never really even going down, which is amazing. I´m really proud of the fact that we´ve been able to kinda get a vision and keep it. We´ve never had a “Lulu” and we´ve never even had like a Blaze Bayley moment, you know what I mean? (laughs) Where it´s like “What is going on?”. We´ve always been able to do it and if you look at the breadth of our music overall, it´s pretty pioneering and pretty consistent and that´s what I´m very proud of. I mean there´s a core Machine Head sound, but we never want a record to sound like the previous record and I think maybe sometime we almost ran too far away from what we had just done. I think we we´re better at it now more than ever and just going “Yeah, let´s try this way and see what´s over here.”. It may be the total wrong way, but we gotta try it. I gotta see what´s over here and I gotta go this way just to see if it´s right, because you know what, it might be the best way we´ve ever gone. You never know until you try it. To me, writing music is a lot like… and this is gonna be a very bizarre analogy, but I like to run a lot, so often when I wake up super hung over it´s like “Ok, you got to enjoy yourself, now you gotta fucking sweat it all out to make the balance, right. So I´ll wake up hung over as shit in some fucking hotel or some fucking club or theater and I don´t have any idea of where I am and I´ll just go out and start running and it´s like you´re just lost for a while. You have no idea, everything´s new and you have no barings and eventually you go “Alright, am I gonna get back?” and then eventually you go “Ok, I know the way back. I know where I´m going.”. It´s like you gotta go and get lost for a second before you figure out where you´re going.

Makes total sense. A final thing. Do you think you´re gonna produce the next album yourself, as you did with “Unto the locust”?

RF: Yeah, “Unto the locust” wasn´t about production experience (laughs) it was the mixing. It was a tragedy with Colin Richardson´s ex wife passing away during the mixing of the record and none of the songs weren´t even finished and at that point we didn´t really have a choice. Some of the songs, like “Darkness within” was 90 tracks of music (laughs) and we couldn´t just give that to some dude and go “Here you go, figure it out!”. We did it and it was crazy, but failure wasn´t an option. It had to be done and it had to get done and by that point I know those songs so well and my engineer and I, he had been a part of it from day one from the first time we tracked any demos, so he knew it and it was the best choice. These guys love me producing it and they´ve already told me that I´m the only one they want to produce it and I´m happy about that. It´s cool. I don´t know if I enjoy it, but I´m good at it so I just kinda do it.

Cool. Looking forward to it.