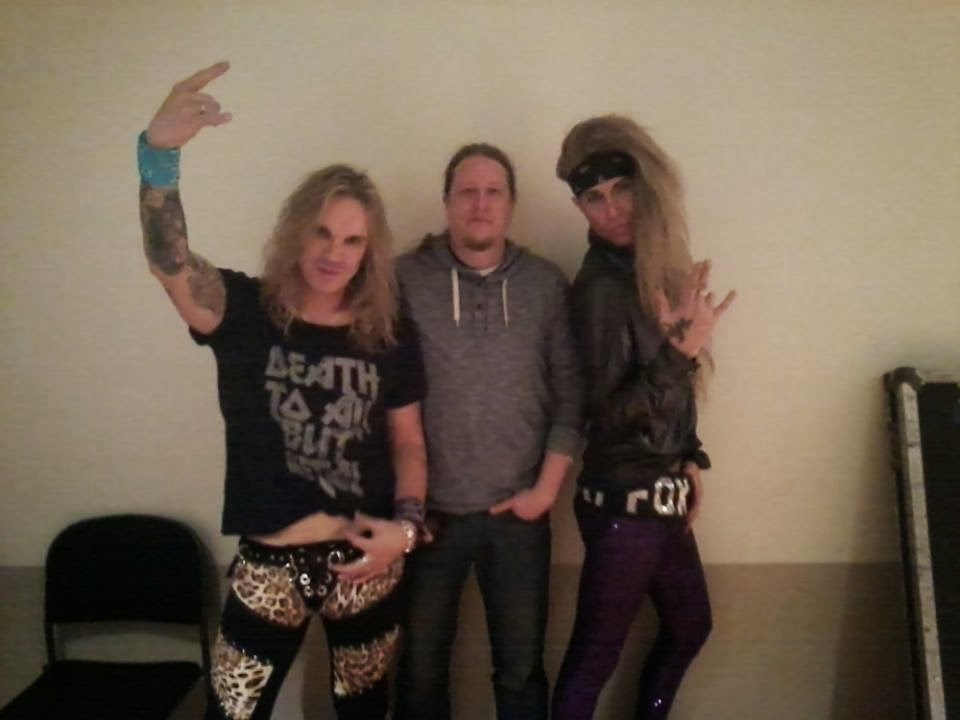 When was the first time you realized you were onto something with the band?

Lexxi Foxx: Let´s see. For me, it was when I was able to afford to get my own apartment. I still live with my mom though because I don´t like to live there all by myself. I like to go to my mom´s for cooking and do my laundry and shit. My stepdad is a fucking asshole though.

Michael Starr: In the beginning we truly had no idea that this was gonna happen. Our plan was to be able to play fucking metal.

Lexxi Foxx: And get pussy!

Michael Starr: At the time Nirvana came out, our way of life had ended, but we never stopped doing it. When we started playing covers and getting paid for it, it was like “Wow, this is cool!”, but we never thought we´d put out records and go on world tours. For me, I would say it was when we got our first record deal. A major one. Still, we tour and go around the world, but when we come home we play weekly cover shows and just keep playing. We played for three years straight.

Lexxi Foxx: Yeah, this is the longest break we´ve taken from our regular job. We started on the Strip in ´99 and we´re getting a star on the Hollywood Walk of Fame…

Michael Starr: Not yet! It´s not here.

Lexxi Foxx: But they don´t know that. I know we don´t have it with us, but it´s for the longest running show in Hollywood.

Any plans for a Steel Panther movie?

Lexxi Foxx: Could be cool! I guess there are some camera crews talking about following us around now.

Michael Starr: We already made a movie.

Lexxi Foxx: We made a movie. See how that happens?

Michael Starr: It would be cool to make a documentary on the real lives of the guys in Steel Panther. On tour we have a lot of fun. Like last night, each guy fucked a different girl.

Lexxi Foxx: And we got hammered drunk.

Michael Starr: It was really fucking fun, dude! I think the world needs to see this, because kids today don´t know what rock and roll is.

Lexxi Foxx: Our tour bus is so bitchin´, we even let the crew fuck our bitches. Like last night, and this just shows how close we are, one girl, while she was sleeping, everybody on the bus got to put their penis in her and it was awesome. That´s how we like to do it on our bus, we share because we´re like one big happy family. But we don´t fuck each other because then we´re gonna have kids that come out slow.

Michael Starr: We´re a tribe and when tribes fuck each other, they have retarded tribes.

Michael Starr: No, but we can go Mormon. The more kids we have, the more metal bands there´ll be. 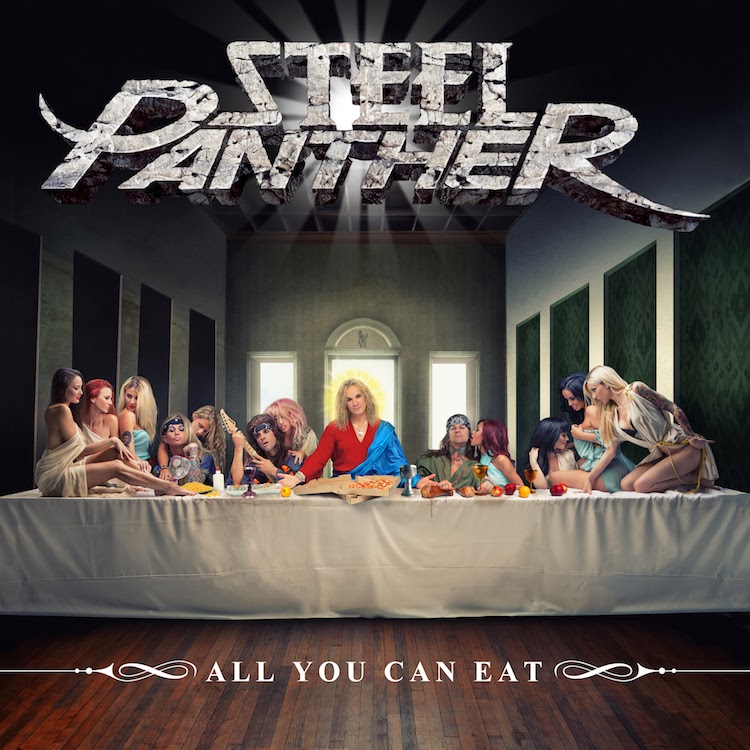 The new album then, “All you can eat”?

Michael Starr: The cover was inspired by Lexxi. We thought it would be really funny to do a cover that coincides with the name, “All you can eat”. All you can eat, insinuates a cheap diner and the picture insinuated quality and high class. You put those together and you´ve got Steel Panther.

Lexxi Foxx: I know that when Dicaprio did that painting, he wanted it to be this amazing thing. Look what we did to that fucking thing!


Lexxi Foxx: You see, he didn´t have what we have today, like computers.

Micahel Starr: We added the pizza in afterwards. There was only one on the table, so we added another one.

Lexxi Foxx. We added all kinds of stuff. What we didn´t do, because we´re smart, we know they could´ve added girls in there but we used trickery to tell the girls that we needed girls, because our computer didn´t work. We couldn´t put girls in there so we needed real girls. So we got the girls. Everything else is trickery.

Dicaprio was an awesome painter by the way.

You´ve got some interesting song titles.

Lexxi Foxx: She´s an old fucking bat! She can be a witch at times too. Not a nice lady at all.

Michael Starr: But he (Satchel) doesn´t know that I used to fuck her.

Lexxi Foxx: Satchel came out of her pussy, but Michael came in.

Michael Starr. Well, I was delivering pizzas there and she was angry because I hadn´t fucked her in a while, but we did a gang bang and it was killer.

How do you come up with those titles?

Michael Starr: It´s easy. They´re all life experiences. It´s like right now. Let´s say we put a song on the record called “Doing an interview in Stockholm” and the interviewer said “Hey, where did you get the inspiration for that?” and I´d go “We did an interview in Stockholm.”. The best way is art imitating life, because that way it is more organic and it´s real and you know that organic stuff is better for you.

Lexxi Foxx: It´s not like with Radiohead where you can´t figure out what the fuck is going on. “I have no idea what the fuck this is! You´re so artsy fartsy with your stupid message. I´m not buying your damn shit because I don´t fucking understand it!”. We tell you! We want pussy and we want a fucking party! We like things that start with P.

How do you go about writing for an album?

Michael Starr: I´ll tell you what I do to get ready for creating the record. I go to the beach and I fucking relax, hang out, get tanned, go get a protein shake, maybe go for a bike ride along Venice and then I´ll come back to the studio and see how many songs Satchel wrote.

Michael Starr: It´s important that we do our job because if we go in there all tensed up, and we´ve done this before, and he´s like “Wake up! You gotta sing!” and I hadn´t been to Starbucks or had a cigarette and we tried to record it but it came out horrible. Next time he went to wake me up and I was at the beach. I came back, sang and it came out killer. That´s when we recorded “Fat girl” the very first time.

Lexxi Foxx: It helps the process out a lot if I just don´t say a fucking word. It´s always “No, no, no! Leave Lexxi, leave!”. It just takes a lot longer if I´m there. Too many cooks in the kitchen.

Michael Starr: The process is tedious, extremely boring, but once it´s done, then you know you´re getting laid.

Are your songs in anyway controversial in the US, with the Bible belt and all?

Michael Starr: No. Nothing. We haven´t heard anything from any artist that we sing about or anything. I think people are intimidated by us. I think they´re afraid. It´s like when you see a super hot chick and you wanna fuck her, but you´re nervous to talk to her. You wanna say something, but this chick is so hot she probably won´t even look at you.

Lexxi Foxx: It´s like… we have a bad area in LA called Compton. You just don´t fuck with that area. If I gotta go to the other side of town, I go around Compton, I don´t go through it. I heard that it isn´t that bad anymore?

Lexxi: Well, if you look like me it is. I would get pounded in my ass. It´s like fucking jail. Not cool. 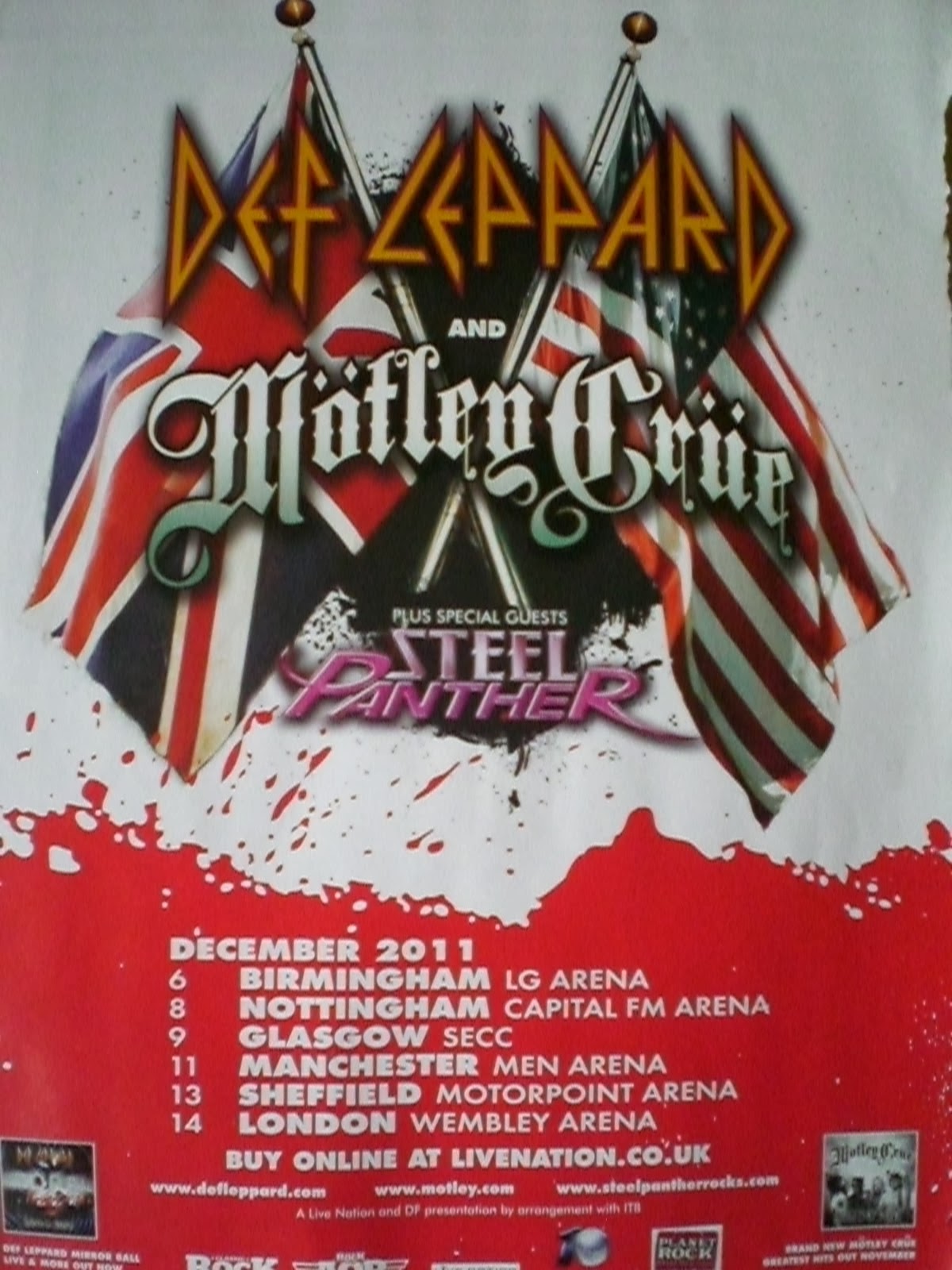 The UK tour you did with Def Leppard and Mötley Crüe, were you the only ones partying?

Michael Starr: Are you kidding me? No! Vince Meal, that guy can eat a party, dude!

Lexxi Foxx: He doesn´t eat and throw up like I do. He keeps it in his belly.

Micahel Starr: Sakky Sixx is always at the catering eating, so we´d hang out and drink. The guy that drank the most was the guitar player from Def Leppard, Vivian Campbell. That guy can fucking drink!

Lexxi Foxx: Speaking of Vivian Campbell, he´s on the album on the song “Gang bang at the old folks home”. He´s so awesome!

Michael Starr: It´s a good thing that Rick (Allen) stopped drinking though. He was drinking at the beginning of the tour and he punched Lexxi. He thought he was a girl.

Was it a dream come true playing with those bands?

Michael Starr: Fuck yeah it was! I would say that that tour was Steel Panther´s destiny because if you go back in time to 2009 and listen to our first single “Death to all but metal”, it simply states in there “Where´s Def Leppard, where´s Mötley Crüe?”. It was a dream come true and it was fun. When we open up for bands of that caliber and instead of saying “Who´s ready for Mötley Crüe and Def Leppard?”, we would say “Listen motherfuckers! You guys gotta make some noise because we´ve been hired to fucking get you riled up for these bands coming up!”.

Lexxi Foxx: You were bitchin´when you did that shit, dude! You´re so fucking good doing that.

Who´s the coolest rocker you´ve gotten up on stage to sing with you?

Lexxi Foxx: That´s very true. Unfortunately for me, the singer from Danger Danger (Ted Poley) got up on stage, but he´s still alive. It always happens in threes. I was gonna ask Eddie Vedder to come up and jam with us. Get that back.

What was the coolest show you ever saw in LA in the 80´s?

Michael Starr: My most favorite show was Van Halen “Fair warning” tour at the LA Sports Arena (Actually it was at the LA Forum, editor´s note), but I could be wrong. I was young and it went by so fast. I remember so clearly watching David Lee Roth and going “My god, this guy is amazing!”. At that point, to me, that was a life changing event.

Lexxi Foxx: Mine was The Bangles, because I would´ve fucked Susanna Hoff…

Micahel Starr: The Bangles? Lexxi Foxx: Yeah, I couldn´t keep my eyes off of her. That´s when I decided I wanted to be in a band, because I wanted to be able to fuck girls like that. Both concerts are why we are what we are today.

Is there a difference between the American audience and the Swedish audience?

Michael Starr: I have to say that America is catching up to Steel Panther. Our shows in the Midwest, we´re doing like 3000 seaters now. The audience is getting younger because we´re getting more radio play and it´s changing.

Lexxi Foxx: I just wanna thank everybody that fucking lives in Europe and came to our concerts, because you guys are way ahead of us when it comes to what´s cool.