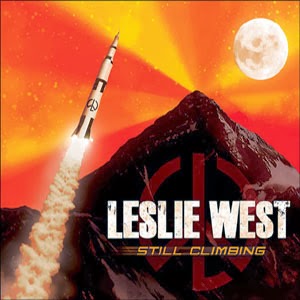 Leslie: Yeah, that´s why we named it that. My brother came up with it and I´m trying to climb a little higher, but it´s a little more difficult now with one leg. (laughs)

Leslie: We wanted to step up the production and me and my co producer did it all here on the east coast and when we were done, we send it to Mike Fraser in Vancouver and he´s an incredible mixer. He´s done Metallica, Joe Satriani, AC/DC and everybody. He did a great job! It was a different approach to have somebody mix it that wasn´t involved in the day to day recording of the album. I really loved the way it came out.

All these people on it, like Dee Snider, Mark Tremonti, Johnny Lang and Johnny Winter, are they guys you´ve known for a long time?

Leslie: Well, I´ve known Mark Tremonti for several years. His brother produced one of my videos, “The sound and the story” and I knew Mark would be perfect to play a solo with me. His style is very different and he did such a great job on that. As fast as he plays, he´s still very clean and melodic and I was thrilled how that came out. Johnny Winter I´ve known for a long, long time. We toured together all of last summer and I played a cut on his album and I asked if he would play on mine and the song “Busted, disgusted or dead” was right up his alley, so that worked out really cool.

Was it done in the studio or did you just do it the e-mail way?

Leslie: Johnny Lang was in the studio with me here in New Jersey and Dee Snider was in the studio too. Mark Tremonti I sent the files. With Johnny Winter, my co producer went out to Connecticut to record him actually doing. When I did the cover of “When a man loves a woman” with Johnny Lang, we were just a foot away from each other, playing in the control room. It was really great.

What´s your take on the record industry these days, having been part of it for so long? Nobody´s selling records anymore, but on the other hand it´s a lot easier to get your music out there.

Leslie: It is. I have no idea what the state of the music business is. Somehow the music´s getting out. There´s different vehicles and different venues and there are no more Tower Records or HMV. I think people miss going to record stores and browsing through albums and so on. The good thing about this album is that we´re releasing it on vinyl, so you get the best of both worlds.

I read that you quit smoking and drinking a few years back?

Losing a leg must´ve been quite a wakeup call and realizing how fragile life is?

Leslie: Let me tell you! Three years ago in June it happened. I was in Mississippi and we were gonna do a concert at the Hard Rock and I never got to do it because I had to go to the hospital. They put me in a coma for four days and my wife actually saved my life. She actually wrote quite a few lyrics on the album. She made them wake me up because they told her that if they didn´t remove my leg, I was gonna die. They woke me up and I was so high from the medication that I didn´t know what she said to me. It was like “Yeah, do whatever you gotta do!”. I´m sure that if I had been fully awake like I am now, I probably would´ve said “What?”. She saved my life. I don´t know if I could´ve done what she did.

A thing like that, did it give you a different approach to your songs?

Leslie: Nah, there´s one song on the album that I especially felt close to, “Tales of woe”. I had a rough two years and I heard the title somewhere. One of the guys I work with came up with the lyrics and it talks about the story. I even say it in one line, “Don´t pretend to know me when you haven´t got a clue… when you´ve never walked a mile in my shoe”. It´s a sad song, but it´s one of my favorites.

You collaborated with Clutch back in 2001. How did that come about?

Leslie: A friend of mine, an engineer, introduced us and they were on Atlantic Records. They´re a jam band and sit around and jam and try to make songs from the jams. Atlantic needed a single, so they called me and me and Neil Fallon worked on a song and I really enjoyed that experience. I wish we would´ve continued on, but they´re still on the road and I saw them a year ago when they were opening for Zakk Wylde. We have the same manager, Zakk and me, and I went to the show and saw Clutch and said hello to them. It was a great experience working with them.

You should do something with Zakk Wylde!

Leslie: Yeah, we did the DVD “The sound and the story”. We played together and talked for 20 minutes and so on. It´s really funny, but at the same time it´s supposed to be a guitar instruction video, but it´s more than that. We got to play together in Chicago. He sort of tells people I´m his father and he calls me dad. (laughs) I say “Look man, I want proof! I want dna!”.

You´ve been doing this for so long. Way back in the beginning, what was it that got you into music?

Leslie: Originally when I was a little kid, it was Elvis Presley. When I really started electric guitar and I first heard John Mayall´s Bluesbreakers with Eric Clapton on it, it was what really got me hooked. It was off and running from there. Cream and then Hendrix and then Felix Pappalardi produced my first group, The Vagrants and then all of a sudden when I saw “Disraeli gears” and that he produced it, I was like “Wait a minute! It´s the same guy?”. We got together and we formed Mountain. The more things change, the more they stay the same, I think. 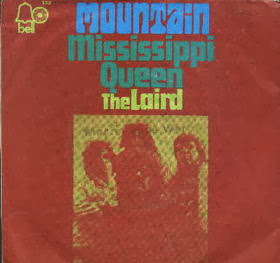 What do you remember from writing the song “Mississippi queen”?

Leslie: Corky Lang, my drummer, he was putting songs together for “Climbing”. He came over to my apartment in New York City we came up with the riff and the chords and the melody and we had a song. We went into the studio and when Felix told me “Count it off!”, he used the cowbell and now it´s the very famous cowbell.

Did you feel back then that it might be a song that could become a hit?

Leslie: No, I think I was too young to think that way. We needed songs and the song came out really good and we were happy. It made sense. It was the perfect song for radio, 2 minutes and 20 some odd seconds and in those days they wanted to have a lot of commercials and play short songs, so that worked out. I do know it was too heavy for a lot of stations over here. They only played it at midnight to six am and not during the day. They played stuff like Santana so the housewives could clean the house fast to that music. It made it in spite of it.

It´s been covered a lot. Do you have a favorite cover version of it?

Leslie: The one I did with Ozzy was great. I went to his house to do that one. I also know that the Beastie Boys sampled it in one of their songs, “Looking down the barrel of a gun”. A lot of groups has sampled this particular song, “Long red”, that I put on the new album. A new version of it. If you look up the song on Wikipedia, it´s a map of how many groups have sampled it. It´s one of the most sampled hip hop songs of all time. From Jay Z and Kanye West to NAS, Depeche Mode and Lana Del Rey. Tons of people. Who knew in ´69 when I wrote it, that it was to be a hip hop song? There was no hip hop. I don´t know what the fuck it was! Anyway, they seem to have taken to it. It´s great and I look at the platinum albums on my wall. It´s great!

How does it work these days? Do they need permission to use it?

Leslie: Yeah, they have to go through my publishing and get the permission from Universal and it depends on how much from the song they sample. Like Kanye West, he used the song and wrote two songs with it. Jay Z used it in “99 problems” and also used the Billy Squier song “The big beat” and Rick Rubin put them together and it´s amazing how many people took different parts of the song. Lana Del Rey took my voice from a live version we did at the Fillmore East.

Through the years that must´ve generated quite a lot of money?

Leslie: It was pretty good. Especially when I didn´t expect it. There are some groups that never got clearance. Lana Del Rey we just found out never got it cleared and she sold between three and four million copies. Now Sony has to work out a settlement with Universal for it.

I have to ask, what do you remember from playing Woodstock?

Leslie: Everybody says they were there and they think they were there. I was there. (laughs) It was quite the experience, man. I´ve never seen anything like it and never will again. Four years ago in August, I got married on stage and we did the 40th anniversary. They built a beautiful new amphitheater where the original stage was and people were in shock. You can see the Leslie West wedding on You Tube. When the justice of the peace asked if there were any witnesses, you heard some 25.000 people scream “Yeah!”. It was quite an experience going back there and getting married. And I´m never gonna forget the first time. It was great!

It´s gotta be cool to be part of something that legendary?

Leslie: Yeah, I was lucky and the reason we got on the show to begin with, was Jimi Hendrix´agent. He was our agent and got us on the show. Besides being good, you gotta be lucky.