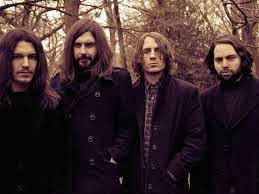 KR Starrs: It was amazing. It took a while to get used to it, since it was such a completely different place for us. The echo of the room and the reverb is a lot different than playing in a club. The monitors were so good in Helsinki and the equipment they´ve got is amazing. It will be hard to go back to the old monitors where you can hardly hear yourself. But it´s just good to play anywhere. This arena (Friends Arena) is the biggest one on the tour. It´ll be interesting.

Did you feel that you connected with the audience?

KR Starrs: Yeah, the audience was really, really good and there was a lot of our fans at the front and even people that didn´t know what to expect, gave us a really good response. 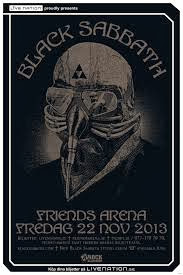 How did you end up opening up for Sabbath?

KR Starrs: Our booking agent put our name forward for it and gave them CD´s and everything and someone liked us, so they offered it to us. We´re lucky. It´s around 17 shows all through Europe and the UK. You never know, they may want us to come wherever they´re going next.

I heard about the strict alcohol rules on this tour. Are you allowed to party at all?

KR Starrs: Yeah, we come into the dressing room and party and stuff, but we´re not allowed to walk around in the corridors drinking. They don´t want that.

Have you gotten a chance to meet the guys?

KR Starrs: Yeah, we met Tony when we played Helsinki. He was very nice to us. It was great.


How did it all start? Had you all played in similar bands before Uncle Acid?

KR Starrs: No, not really. The band, when I started it, was really just two friends in Cambridge and there wasn´t a lot of musicians to sort of do it with. I just wanted to record a lot of songs basically and make an album. We never really thought we´d play live. It was a three piece and it didn´t sound that good live. We played a couple of shows that were terrible and then we thought we´d just release albums and be a studio band. Then during the recording of “Blood lust”, the band sort of fell apart, so I pretty much played bass on that album. It´s basically just me and the drummer for that whole album. We just thought “Fuck it! That´ll be it” and we´d just never do anything else. (laughs) We just kinda split up the whole band and that was it. Then “Blood lust” started selling really well and Lee (Dorrian) got involved and we thought that maybe we should put the band together and try doing some live shows? Eventually we got a good line up together, which is the one we have now. It´s the best line up we´ve definitely had. It took many years to get to this point.

Have any of you guys studied at Cambridge?

KR Starrs: (laughs) No, I just happened to work there and the rest of the guys live in London. As I said, I couldn´t find any more musicians in Cambridge, so I had to look for the next bigger city, which is London, and that´s where I found the other guys.

So Cambridge is not a musician’s town then?

KR Starrs: No. The university controls everything and they own so much of the city and if there are any sort of night clubs or music venues, they´ll shut it because they don´t want their students partying. That whole academic thing just controls Cambridge. It´s quite sad, really. Academics in Cambridge don´t want that. They just want everyone to focus on their studies and not have any fun.

Are you the main song writer in the band?

KR Starrs: Yeah, I write all the songs, just because it´s easier that way. (laughs) It´s hard for me to sort of compromise and work on ideas with other people. I don´t know why? It might not continue though. Our bass player sent me a really good song a couple of months ago and said “Do whatever you want with it!”, and I´m using a lot of the riffs, ideas and melodies, so it could change for the one maybe. 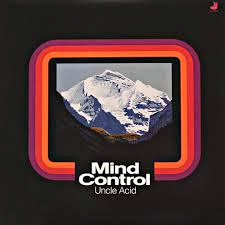 You´ve been getting really great reviews for your latest effort, “Mind control”.

KR Starrs: Yeah, it´s very good. I think maybe the Americans doesn´t really get it. I think a lot of people expected another version of “Blood lust” and they wanted something that sounded exactly the same and had the same concept with horror and everything, but this is a completely different album. The European market definitely seems to support it.

Still the US has a lot of doom and sludge bands.

KR Starrs: I think that maybe the promotion hasn´t been really that great over there, because we´ve not played there yet. I think that when people see us live and they hear the new songs live, they appreciate them a bit more. Maybe if we tour over there, it´ll change. I think the plan is to maybe go to America early next year or something, which should be good.

From where do you draw inspiration for your music? Do you read a lot or is it just horror movies?

KR Starrs: A little bit of everything. Once you have the idea and then sort of do research on it, like I was reading up on mind control and Charles Manson, Jim Jones and people like that and sort of get an idea of what they did and then add that into the concept.

Do you write anything out on the road?

KR Starrs: No, not really. I just concentrate on the shows and things like that. Sort of relax before and after. I need quiet and alone time to be able to write, solitude. Otherwise it´s just impossible. (laughs)

Are you already now thinking about the next album? 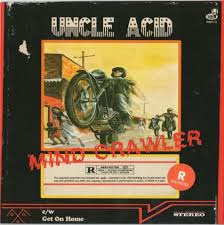 How did you end up with Lee Dorrian and Rise Above Records?

KR Starrs: He e-mailed me through myspace and just said that he wanted to put the album out, because we were doing it ourselves at that point. He said that he could put it out on vinyl and we thought that was great because no one had offered us that. He liked the music. They´ve done a good job so far.

Do you listen to any Swedish bands?

Bands who also go for that retro sound. What is it about this retro genre that appeals to you?

KR Starrs: I´m not sure. I think sometimes it´s the balance of it. Like with Sabbath, there´s the heavy dark riffs and then you´ve got Ozzy´s vocals on the top, that are very melodic and almost Beatlesque, which is sort of what we´re trying to do. It´s the kinda contrast between light and dark that I really like. You really don´t get that in music anymore.

And you´re releasing albums in a time when no one´s buying albums and it´s just about individual songs.

KR Starrs: Yeah, they´re missing out on the whole experience. Vinyl though, more and more people are kinda rediscovering it and vinyl sales are going up and hopefully that continues. I think that people that like this sort of music, appreciate the whole package. They want the artwork and the sleeve and it would be sad if that would decline.

Next summer then, any plans for the festival route?

KR Starrs: I think so. We played a lot of festivals this year. Next year probably not as many and hopefully I´ll have some time to write for the new album, but definitely festivals. Maybe Sweden Rock or something? WASP are playing there and I´m a big WASP fan. (laughs)

Was WASP and 80´s metal stuff you grew up with?

KR Starrs: My parents listened to The Beatles and Simon and Grafunkel, good music. I listened to that as well and then just listened to a bit of everything, but yeah, I Iistened to WASP and Maiden and that old school stuff. I still listen to WASP.

But it wasn´t that kinda music you ended up playing yourself.

KR Starrs: No, not really but in some ways, when I listen to WASP, I can hear that basically I´m just ripping Blackie off because he´s doing heavy riffs with two or three part harmonies. When you look at us, it´s pretty much the same thing. It´s heavy riffs and there´s two part harmonies through the whole song, so I guess that´s where that influence comes from, partly. It´s a different style obviously, but I can see the influence there.

What got you into music in the first place? You mentioned your parents.