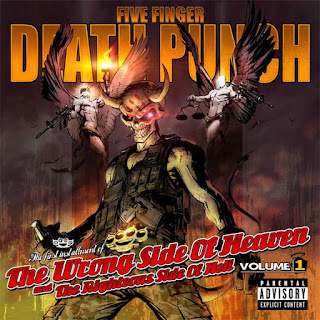 What was it that made you come into this creative flow that resulted in two albums?

Ivan: At first it was really difficult for me to get into the studio. We had just gotten of the road and I had a lot of rust on me and anybody who knows me, knows that I do not like to be in the studio. They guys were in there for about the first two months and they threw together like 17 or 18 tracks and then they started throwing them at me and I´m just going “Man, this is overwhelming!”. I dug in and ripped my chest open and let the monster out and I just started writing. Piece by piece it started coming out and by the time I was done, six months later, we had 27 tracks. We were all sitting at the table discussing how we wanted to go about this and if we were gonna shelf some of them, but the reality of it was that they were all amazing to us. We didn´t wanna make it so that two years from now, we release these tracks. They were special to us so it just seemed more realistic to make two albums and it came out fantastic, man. We´re really enthusiastic to get it out to the world. Not to mention the guest vocalists on the first album. It´s gonna be an experience for sure.

Did you discuss releasing it as a double disc or was the idea from the beginning, to have them released separately?

Ivan: We were gonna do a double disc at first, but with money being tight these days and being the season that it was in, we just thought it was more realistic to digest the first one instead of force feeding it to them and give them a chance to sink their teeth into the second one later on in the year. Overall I think it´s a better idea. Don´t get me wrong though! We were really looking forward to having it like a double disc, but in the long run this just seems like a better idea.

Did you really feel that all the songs had what it takes?

Ivan: It´s a catalog in itself, bro. I´m just so impressed with it and they guys were too. I really truly think this is our best material ever and there wasn´t one throw away track and that was the benefit of it all. If there was a couple of them, we probably would have shelved them or whatever, but we put our hearts and souls into this one and I think it´s gonna show.

Releasing albums these days when record sales are down the drain, do you ever kinda wish that it was 1990 again, when bands were still selling a lot of records? It´s gotta be difficult these days?

Ivan: I´d say yes, if we didn´t have the fanbase we have. Our fans are militant, man. They´re probably the best in my book, ever. They stick by our side through thick and thin and they still purchase albums. It really hasn´t had that affect on us. I see what you´re saying and don´t get me wrong, I´d love to sell two or three million albums.

Do you write stuff that is not for Five Finger Death Punch?

Ivan: Most definitely. I´m actually going to do a side project after this next album cycle. I´ve already got a few guys on the line, that I´m really proud to say I´m gonna work alongside with. I talked to the guys (in the band) and after doing five records like this, it´s time to take a little bit of space from each other and that way, when we come back to do the next album, it´ll be fresh to us again. I´m definitely looking forward to do this side project.

Who’s idea was it to bring in Rob Halford?

Ivan: That was mine. He was on That Metal Show one night and they asked him what he thought about some of the newer bands and he was quoted saying that Five Finger Death Punch was probably his favorite of all the new bands and my jaw just hit the floor, “Wow, the Metal God!”. Anyway, our manager Jackie (Full Metal Jackie) had interviewed him two or three times on her show, so I approached her; “It might be a long shot, but let´s just see.”. She called his management and at first they were like “No, he´s busy!”, so I kinda brushed it off. About a week later, he had heard the track himself and he literally called Jackie on his cell phone and said “I´ll be there in a week! I´ll record it in Vegas with the guys.”. I was just in awe. It was fucking amazing. He comes to the studio and he´s recording the track and it´s completely surreal at this point. He walked out and true story, I went to shake his hand and he gave me a hug and I was just trembling, man. I just didn´t know what to say or do and he just ended up being the most humble and down to earth, grounded human being I think I´ve ever met. Real honest, very well spoken and it´s an experience you live your whole life for.

It´s pretty cool that he actually showed up to do it and not just went for the e-mail way?

Ivan: Most definitely. It was more intimate for sure, man. And the fact that he wanted to meet us. That´s just old school style. It was just an honor.

How long did it take for him to get it done?

Ivan: You´re talking about Rob Halford! He was there for two hours and it was fantastic. Then we got Max Cavalera and I´m a huge fan of him and we´ve gotten to tour with Soulfly a few times and Sepultura is one of my all time favorite metal acts. We´ve got Jamey Jasta from Hatebreed and him and I go back years and I´ve always admired his style. We´ve got Maria Brink from In this Moment and just to put a twist on everything we´ve got Tech 9. I´m really looking forward to the world getting hold of this.

Was Halford someone you were inspired by growing up?

Ivan: Oh, most definitely! Judas Priest is one of my all time favorite bands and that´s something him and I talked about. He´s sitting there swapping stories with me and what not and he talked about when they toured in 77 and I was like “Man, that´s when I was born!”. There´s not enough words in the universe to explain how I felt.

Any plans of having him showing up at a show in the States and do the song?

Ivan: Anytime! He´s in the middle of recording now, but I gave him the opportunity and I said “Anytime you´re in our area or we in yours.”. He performed with us at the Revolver Golden Rock God Awards and it was just killer, because nobody else knew he was there. We snuck him in the back, so nobody even knew he was there until he walked out on stage and you could just hear the silence. You could hear a pin drop. He fucking nailed it on stage too. I forgot a couple of the lyrics and he was nailing it. I was looking over at him and went “Damn dude, I can´t remember my own fucking song, I´m so overwhelmed right now!”.

You´ve been doing this for a number of years now. How would you compare these two albums to your first one? What would you say is the major difference?

Ivan: I think these albums encompasses everything we´ve done in the past and takes it to another level. I think it´s an “if it´s not broken, don´t fix it” kinda thing. It still got our sounds and our feel, but having that many songs too gave us a chance to experiment a little more and do some cool crazy shit that we haven´t actually gotten to do in the past. If anything´s different it´s definitely some experimental stuff. The instrumental on this one alone, “Diary of a dead man”, that´s just something that nobody would ever see coming.

How do you stay sane on the road? You´re on a bus and wake up in a new town every other day, you do a show and then it´s the same thing all over again.

Ivan: Well, first off, to answer that I would have to be sane and obviously I gave that up when I decided to become a vocalist. (laughs) We´ve been doing this for a while now and I think the hardest part is the family and friends we constantly have to leave behind. I myself have kids and that´s the hardest thing for me. Other than that, I live and die for that experience and I´ve worked my whole life for it.

What made you end up in Vegas?

Ivan: I got tired of commuting from Denver? (laughs) The guys all lived in Vegas so every time we had to do something or we had somewhere to go, you´re talking about a three hour flight just to get out there, spend three or four days in preproduction and then fly back. It just got a little bit too chaotic, so to me it seemed like a no brainer being closer to my boys. That and that there´s no state tax. (laughs)

Is Vegas still the sin city?

Ivan: Are you kidding me? Absolutely! 24 hour lifestyle and you can´t get enough of it.

I recently read an interview with you, where you said you consider yourself a bit of a recluse and still you´re the frontman. How does that work?

Ivan: Well, I figured being the frontman, you´re exposing everything about yourself to the world, so they get enough of me when I´m up there and when I´m on the road. When I´m at home, I shut off, turn the switch off and spend as much time as I can with my kids and I stick to what I know. Not to mention that I tivo a whole bunch of television shows, so I can catch up.

Ivan: Most definitely. We´re actually talking about implementing the second CD once it´s done. I can´t really say how long we´re gonna be out, but we´re probably looking at two – two and a half years. We gotta touch base all over the world and we´re talking about Australia, Japan, Europe, The States, South America and that´s not even repeating and going back a second or third time.

Any places you´re gonna play that you haven´t played before?

Ivan: South America. There will be a few on the list for sure.