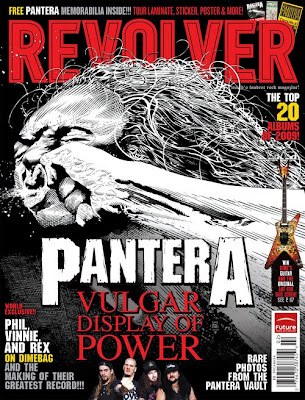 It's a pretty special opportunity for me to get a chance to illustrate this particular cover. Strange how these things come full circle. I had a similar experience a few years ago when I was asked to do the artwork for an Iron Maiden album called A Matter of Life and Death. I had a strong connection with Maiden, too. Seems like I'm two for two so far, which is, like, the craziest luck! It's pretty special to get a chance to work on or with something that has inspired you, and Pantera's Vulgar Display of Power certainly had a major impact on me back in 1992. Musically it was where I was at as a 25 year old. It was raw, visceral, powerful, and it was speaking to me lyrically as well. One phrase that still sticks out for me is from "Mouth for War": "When I channel my hate to productive, I don't find it hard to impress." That really resonated with me as I was full of anger and angst, and I used to channel that into my work. Subsequently there was a definite, almost audible energy in the illustrations that was born of that inner strife. I think it's one of the ingredients that separates an artist’s work from the status quo. There has to be a driving mechanism, for some it's anger, for some it's love, or it can be a combination, shit, whatever it is that drives you to create is a good thing and cathartic for some. I used to say, for me drawing was like free therapy.
The music I listened to as I worked was additional and essential fuel. A lot of my early Vampire illustrations, the work that helped put me on the map as an illustrator were powered by heavy doses of Pantera. One of the things that made them so fresh with this record was their own evolution, they found a voice with this album; musically, they'd stripped themselves clean. This was bare bones as the title implies. And lyrically it was complementing the music with that in your face-bare bones style. It was smart, and it was telling young people we all have problems, you can sit around and be defeated by the shit life throws your way or you can stand up and fight back on your own terms. That was a lesson I was ready to embrace.
I was a really big guy back in '92, well over 300 pounds, very self conscious. That's where a lot of my anger or self-loathing came into play. I decided finally that I was going to do something about it and in the spring/summer of 1992 I made losing weight my religion. Vulgar Display of Power was my soundtrack. Really it was two albums, Vulgar and Rollins Band's The End of Silence. Those two records drove me to stay determined and focused. I ended up losing over 100 pounds in about four months. I transformed myself, and that was a powerful thing. I felt empowered by the experience. I don't know how I'd have ever done it and kept my sanity if it hadn't been for Pantera and Hank [Henry Rollins]. I feel like I owe them both a debt I could never repay, but that's the power of music.
When I got that call from the guys at Revolver, and they wanted me to do a cover I was pretty excited. When I found out what it was I'd be illustrating it turned into an opportunity for me to say thank you to those four metal madmen. This gig has joined the ranks of a growing list of dreams that were able to come true for me. Sometimes you gotta pinch yourself.